DatabeatOMNI can stream content from a local or an external (Internet) streaming source. But streaming from the internet may be expensive, how can we limit streaming costs? 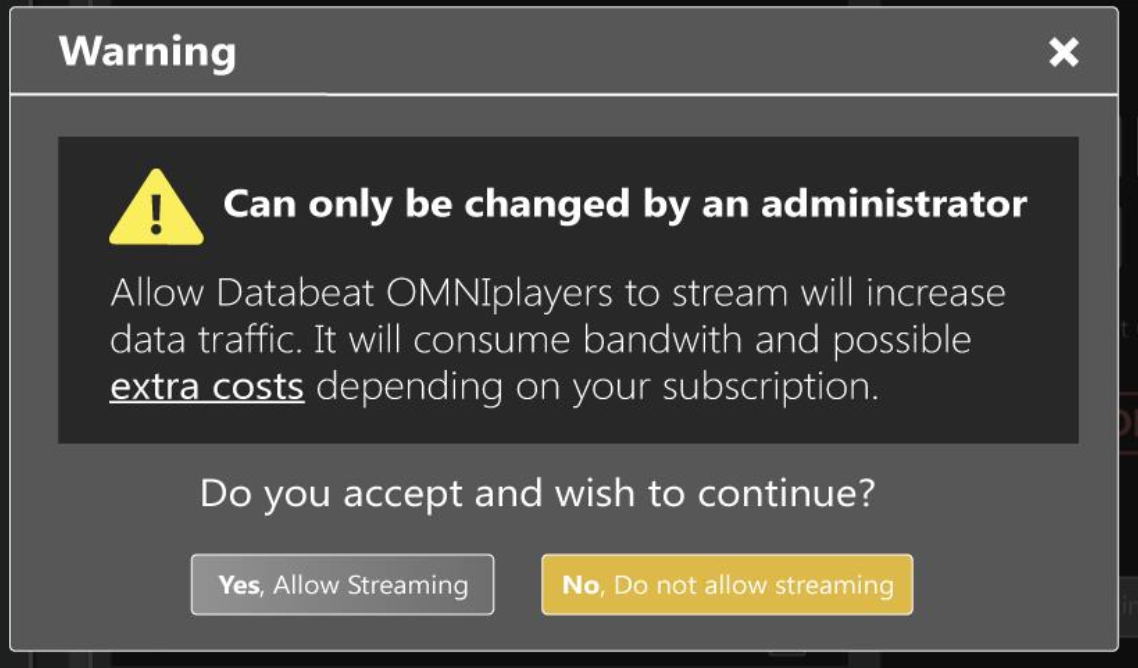 The core concept of Digital Signage is download-and-play. It means that content (media files), i.e. a 20Mb video file, or a 1 Mb Picture file is download to the local player before it is played. The files in the media plan are downloaded once and then played from local hard-drive. It is faster and consumes less bandwidth, especially so when files are to be played in loops, often many times.

Over the last years, we can stream from various sources and in several ways. At office, home and using our smartphones, we take this for granted, but the truth is, it consumes bandwidth, some times very much. This is the kind-of opposite of Download-and-Play, and for Digital Signage solutions, one should be aware of and able to control possible consequences, high bandwidth consumptions and potential extra costs.

DatabeatOMNI by default, disable internet streaming (as far as possible) but allow customers to turn it on. ONLY administrators may turn it on.

Where can streaming be controlled

Locations -> OMNIplayers: Doubleclick on the respective player or select the edit icon.

On the right side, you will see a streaming icon that is grey by default (disabled)

Click on it to allow streaming for that player (Administrators only can change).

What is and is not allowed

Allowed (regardless of streaming settings)

Not allowed (unless streaming is allowed)

Note: Social Media widgets containing video is excluded by default. It may crash with underlying video, and many hardware vendors do not support video-on-video.

On general, we advise customers to be careful with webpages and streams, both to avoid bandwidth congestions and escalating costs.