How to use an OMNIplay3 with a digital display wall

In this article, we will show you how you can use an OMNIplay3 to show content on a digital display wall.

What is a digital display wall?

Display walls come in many different sizes and formats. A typical digital display wall layout consists of four displays that are mounted 2x2. This is a cost-effective solution and a flexible format to work with when it comes to content production.

What you need to set up a 2x2 video wall

The four screens are mounted on the wall in a 2x2 layout. The OMNIplay3 connects to the screen at the top left. The image from the OMNIplay3 box is displayed on the top left screen via an HDMI cable. 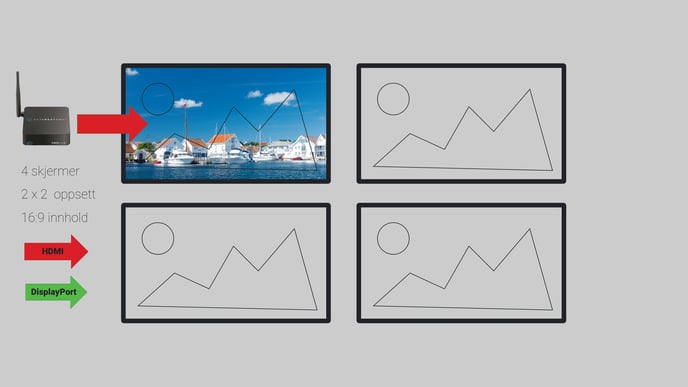 Now we need to view the image that is on the screen in the upper left corner, connect the displays with cables, and enable the 2x2 video wall layout on each screen. There are several ways and cables you can use.

For example, on Samsung professional displays, DisplayPort cables are preferred for display walls, but multiple screens also support video walls with HDMI cable. The most important thing about these cables is that they are long enough to pass between each monitor and are of high quality.

A quick tip: In this step, the screens determine which cables you need to use and how the video wall menu setup is and what it supports. Typically, Daisy Chain and video wall setup on professional screens above 43 '' are supported, but definitely recommended to check this out before purchasing screens! 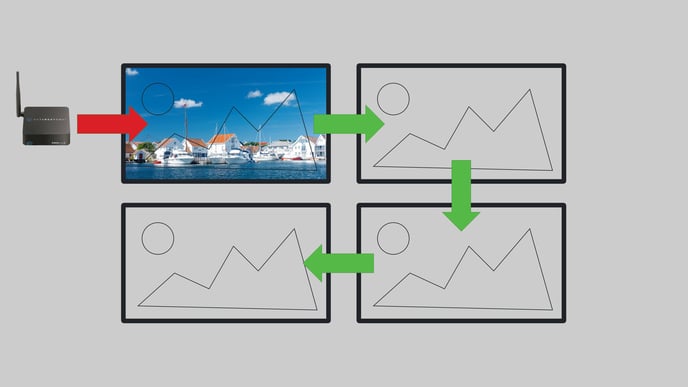 The screens now have a source and have been connected have been daisy-chained. The last thing left is to enable the video wall functionality of the screens. This is typically done with the screen's remote control, and the settings can be found in the Menu. On Samsung professional screens, you can press the "HOME" button and select the feature display wall.

In the display wall menu, you must set the screens to 2x2 and give each screen its position in the layout. When you have done this, you are done setting up your video wall.

I hope that you have learned something new :) If you are uncertain, contact the support team and they will help you with setting your digital display wall.